Fast-forward to today, and the future feels like it's finally here. Many of us already have some sort of virtual assistant in our home that talks to us, that answers our questions, that helps us get through the day. But this amazing device doesn't look anything like the computer creatures we dreamed about as kids.

My goal with this project is to transform an Amazon Echo device into something that feels more like a character in the story of our lives. To do this we're going to hack into the Echo itself, add some animatronics, add a screen from an old television, and try to make this machine feel a bit more . . . alive.

Our family runs a small computer repair business in Tbilisi, Georgia. In the summer months we prefer to meet with clients at a table under a canopy of grape vines in our courtyard. This is a wonderful set-up, but there was a problem: there was no way to communicate between the table in the courtyard and our workshop upstairs. So if I needed a tool, or to print paperwork, I had to either yell at the window for my wife, or leave the table and go upstairs. I love the look of vintage Soviet rotary telephones, so I built this analog intercom system to facilitate better communication. When one receiver is picked up, the other phone rings. When both receivers are raised, you can communicate normally via the line that connects them. A fun project, and something we will use every day at our shop.

At the height of the pandemic I took a programming course at Portland Community College: "Introduction to Programming in C". For our capstone project, my partner Danny and I had the ambitious idea to write a program that would run Dijkstra's algorithm in a randomly-generated maze environment. (Dijkstra's algorithm is a method for finding the shortest paths between points in a graph, such as road networks.) Limited to a text-only format, we decided to embrace an ASCII image interface not unlike the dial-up bulletin boards and early text-based adventure games of the 1980s. Bascially we were creating a text-only graphical user interface, and to do this it felt like we were operating on the outer frontiers of what is possible to achieve in C. In the end we were not able to get the algorithm working properly, primaily due to the data transfer limitations of the school's servers that we were required to use, but I'm proud of the project nonetheless. I learned a ton about programming and creating a user experience with very limited graphical resources. 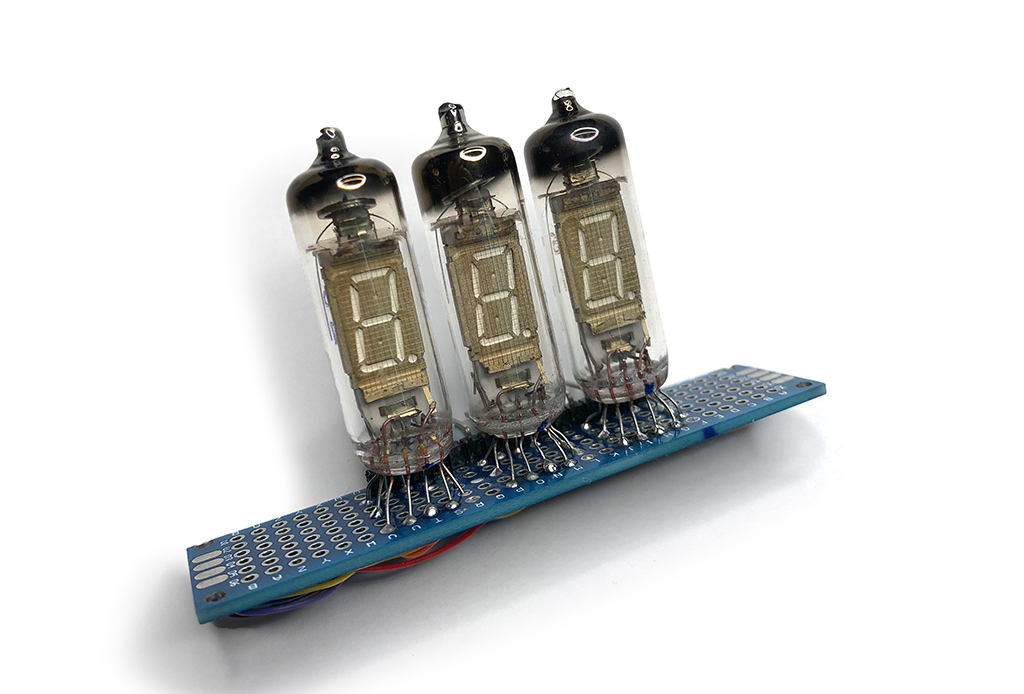 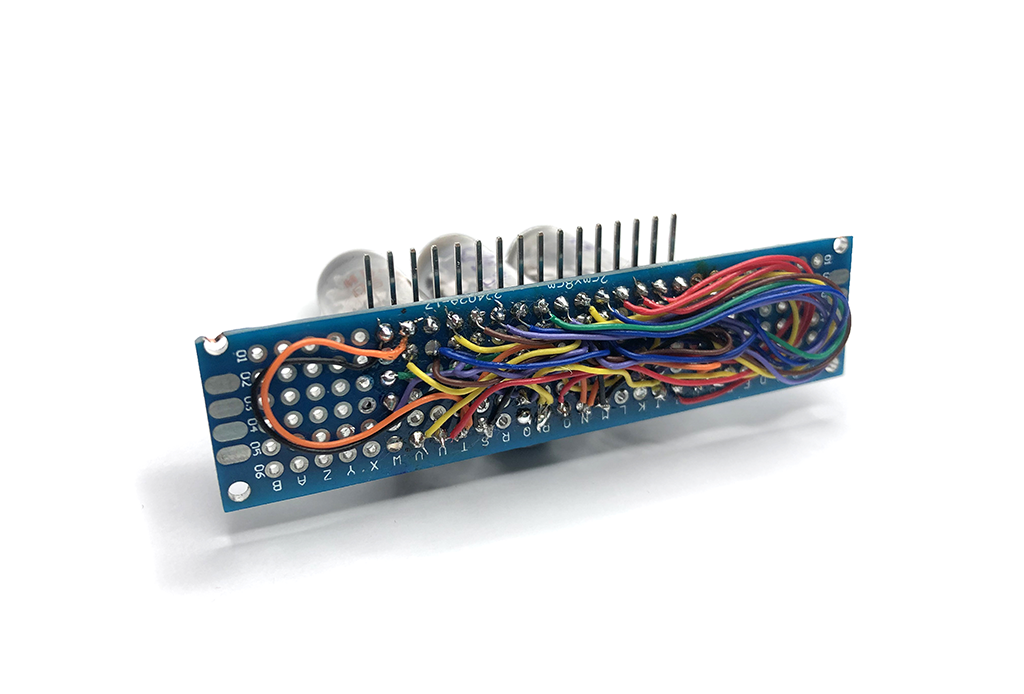 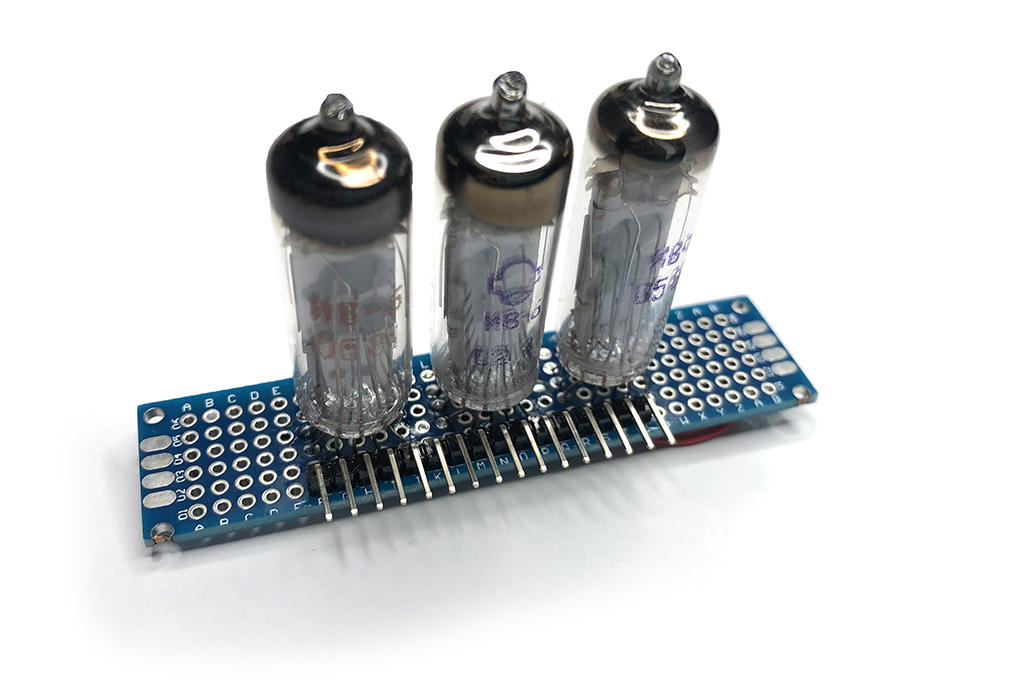 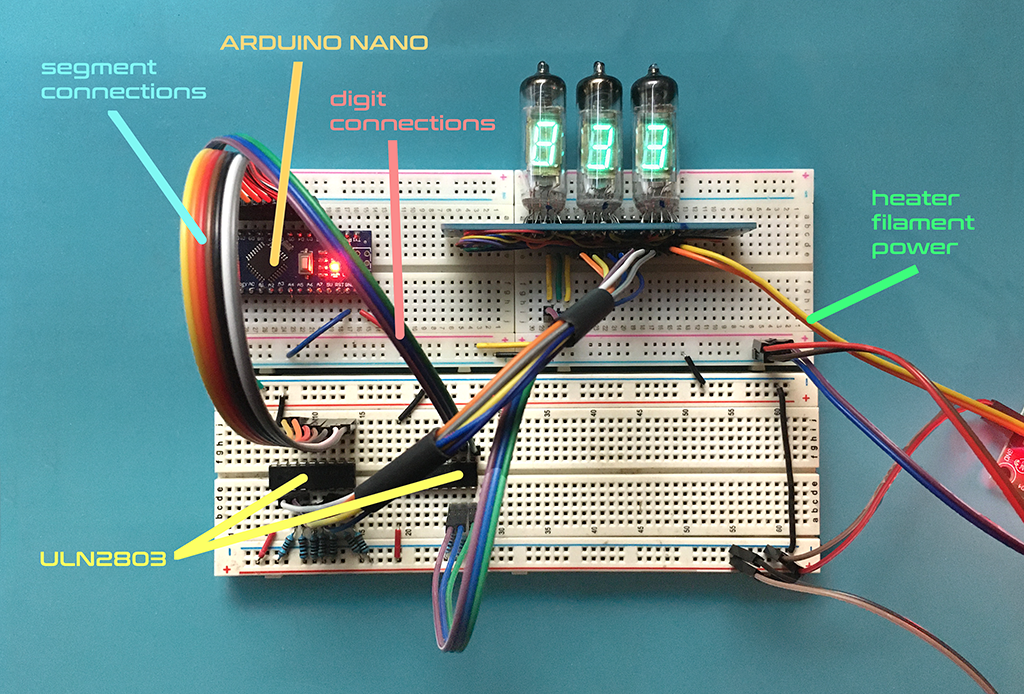 I've had a handful of Soviet-made IV-6 (ИВ-6) tubes sitting around my workshop for years, mostly because I love the analog feel of their electric-cyan glow. It takes me back to all the electronics from my childhood. But these displays require serveral different power supplies to drive them, and I'd never really tried to get them working for any of my projects. But when I recently started restoring a Soviet-made variable transformer, I realized they would would make the perfect display for the voltage output level. So I built this driver circuit to get them going, with the idea that it could be applied to a wide range of future projects. I learned a ton about multiplexing and transistor arrays on this build, and now that I've climbed the mountain, I've a got a simple, compact toolkit for incporporating VFDs into future projects.

Check out the full build on Hackster.io! 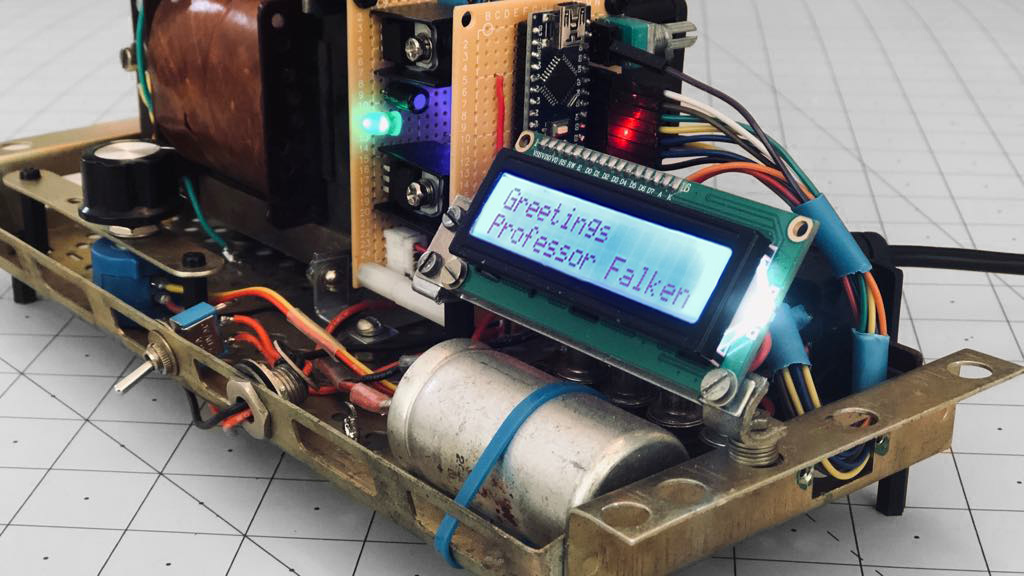 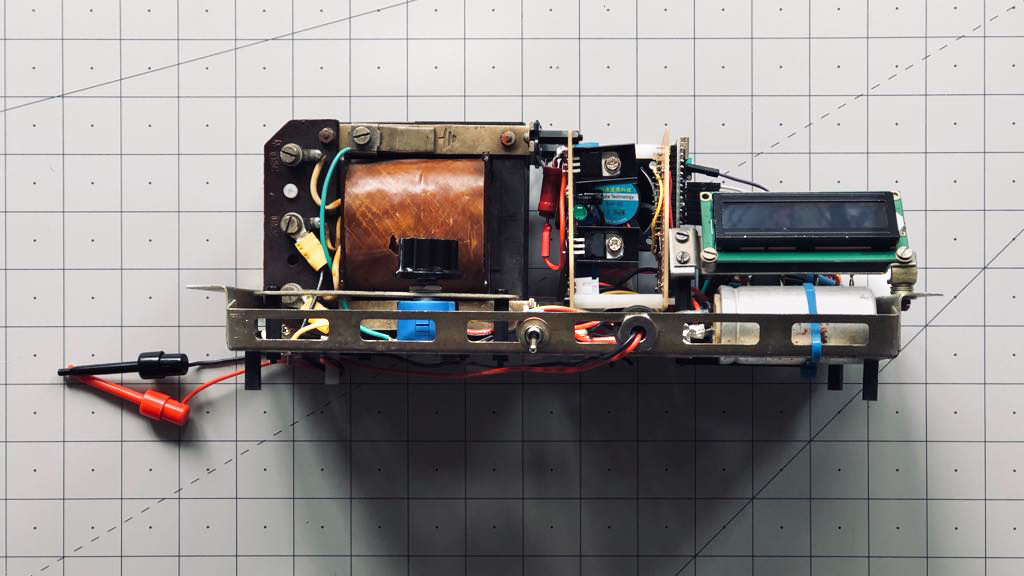 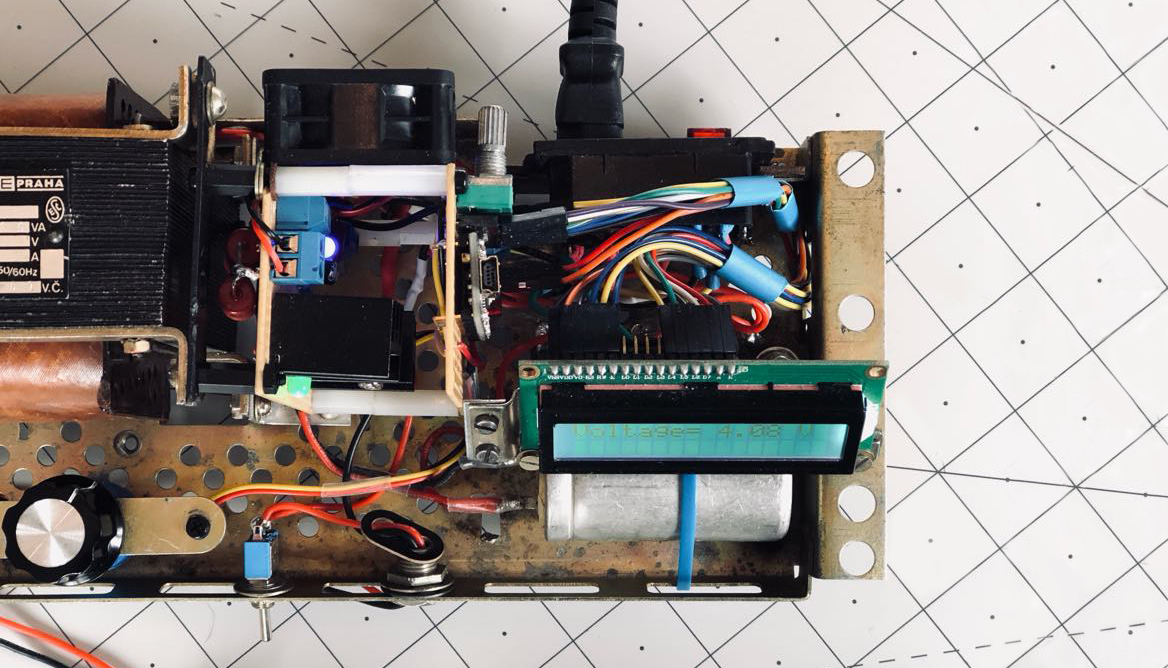 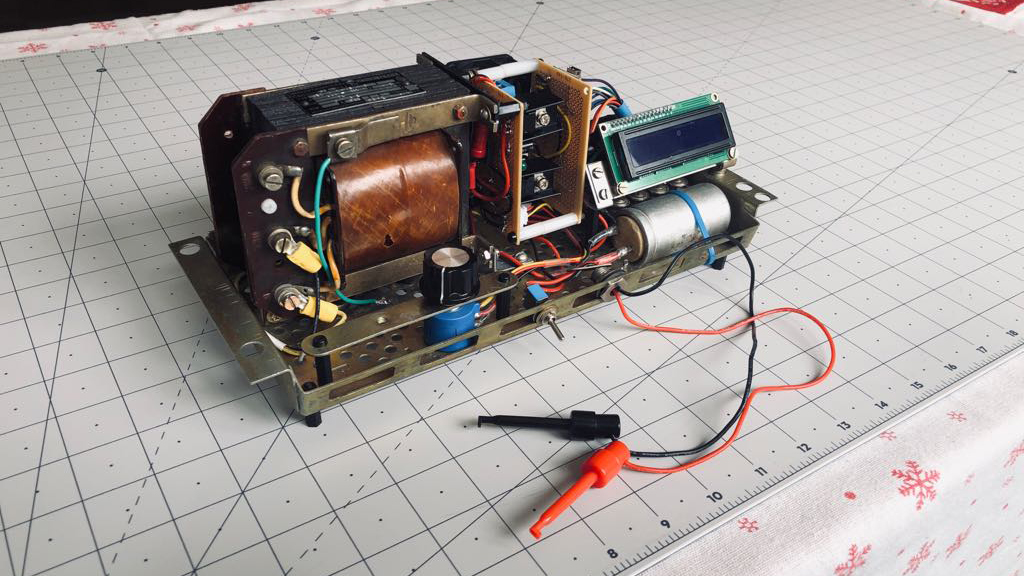 This project marked the beginning of a new chapter in my creative practice.

I needed an adjustable power supply for my workbench, but I wanted something that felt like a character in the story of my life, not just a piece of equipment. Assembled from an Arduino Nano and parts from a 1975 Soviet television, this was my first major build—the culmination of many months of study and many failures along the way. Creating an object that users could physically operate to solve a problem is such a rewarding experience. As I shifted from my media practice to electronics, it felt like the door to a new creative universe had opened.

Check out more of my builds and vintage tech restorations on on my YouTube channel!

In 2020 I was commissioned to direct this short film about a collaboration between a fashion designer and a photographer in Tbilisi, Georgia. My goal was not to tell the story of their project, but rather to construct for the viewer the world that they inhabit in their creative practice. To do this I sought to portray a hypothetical civilization built around the vision and taste of these two creators. We filmed over eight days in and around Tbilisi, and in the mountains several hours to the north.

The Paris publishing house Éditions du Seuil commissioned us to create a piece to celebrate the launch of Sven Hansen-Love's new novel, Un Emploi Sur Mesure. Inspired by the visual styles of directors Wong Kar-wai and Tony Scott, we created this poem as a tribute to the process of creation. It was shot in one production day on B/W 35mm film stock, which was then processed in Prague, scanned in Moscow, and edited in Tbilisi.

The brief called for a piece that conveyed the global importance of investigative journalism and the often extreme risks that journalists face in their work. I generally avoid using voiceover narration as it rarely meets expectations, but with this piece I needed to situate contemporary journalism within a larger historical narrative. So rather than write a script and record a voiceover artist, I decided instead to research recordings of famous speeches. Over the course of several weeks, with help from archivists at the John F. Kennedy Presidential Library, I assembled a series of exerpts from Kennedy's speeches to fit the project at hand.

I was brought on by McCann Tbilisi to direct this spot for the United Nation's HeForShe campaign. One night shoot at a rugby field in Tbilisi, Georgia.

Andrei Kovalev and I were commissioned to produce this fifteen-episode online course for the Spéos International School of Photography in Paris. Our goal was to build a course unlike any of the many other photography courses we had seen, something that was focused first and foremost on taking the students on a journey, rather than simply teaching them techniques. The project involved several months of writing and research, fifteen shoot days, and 50-60 days of post-production.

The video above is the twelth episode in the course. You can check out the full course on the official Speos course page.

A Ukrainian Love Story follows a young man’s transformation from leader of a violent, ultra-right movement in Kyiv into a loving father and partner. It is also, and more importantly, a snapshot of a country at war.

While I was working as the creative director at Coda Story we launched this series to counter the Russian government's efforts to erase the history of the Soviet Gulag: a system of fear and forced labor camps that imprisoned or exiled over 28 million people in the Soviet Union from 1918 to 1987. The series relies heavily on interviews with survivors, using animation and archival footage to relive their stories.

While working as the creative director at Coda Story, I produced this short trailer to mark the launch of Coda's new editorial focus on authoritarian technology.

I was commissioned by Design Can Do to make a short film about their 36 Hackathon in Cape Town, South Africa. You can check out the full version of the film here.

I shot this film on 16mm color negative while a student in film school. We shot at a record shop in Marin County, California, and at one of the few remaining vinyl pressing plants in California, located in Long Beach. I'm very please to see that vinyl sales are making a resurgence.

The above clip is a short excerpt from the full film.

I shot this series of three commercial spots with director Nino Gordeladze and the awesome creative team at Windfors in Tbilisi.

We shot this music video over three days. For the opening club scene we redressed the lobby of the Tbilisi Opera House. At some point rumors started circulating around town that we were shooting pornography, and it caused a huge scandal.

I shot this project on 16mm reversal film using a wind-up Bolex camera and edited the camera-original celluloid on a flatbed editing table. The rodeo organizers had given me an all-access pass to the event, which allowed me to do extensive scouting. This was one of my first films, and I often wonder what it would look like if I made it again today. 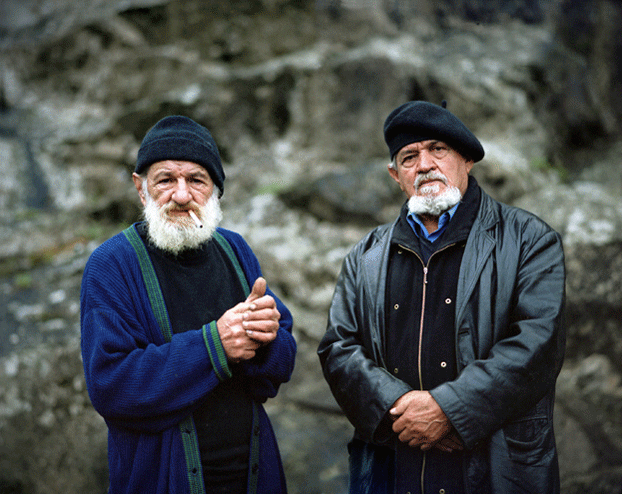 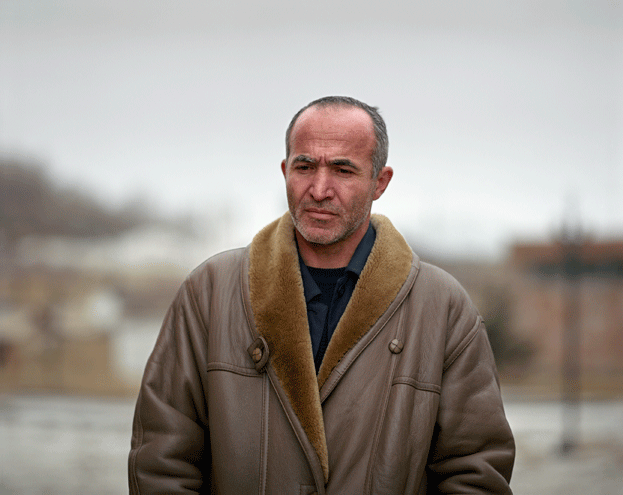 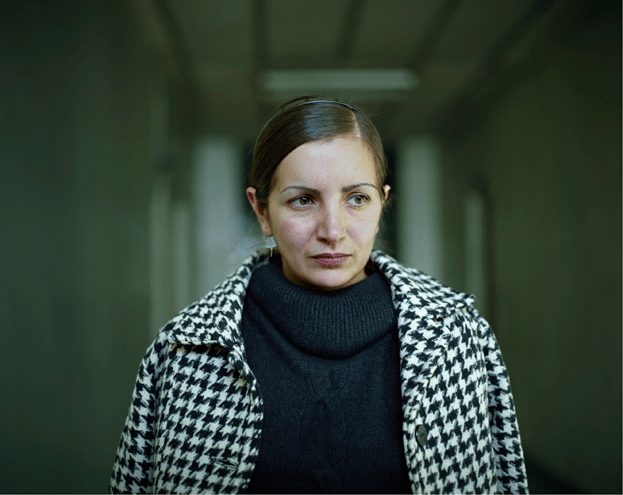 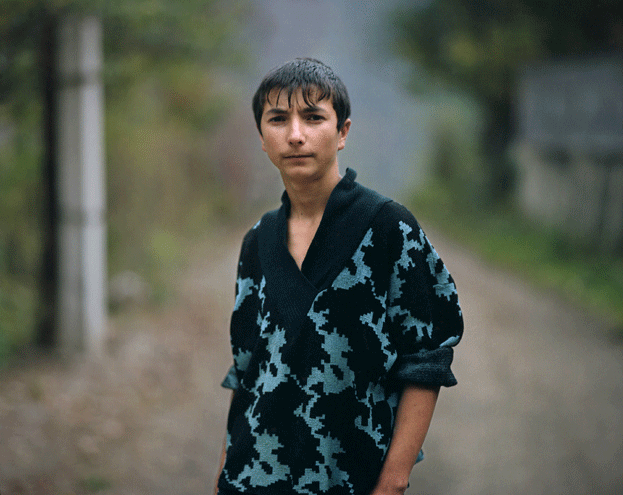 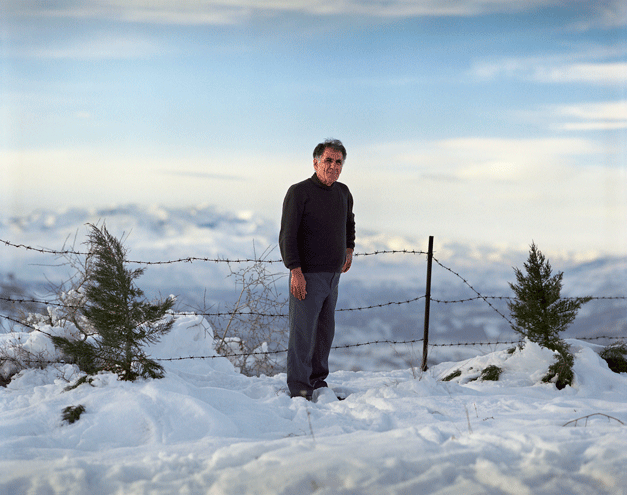 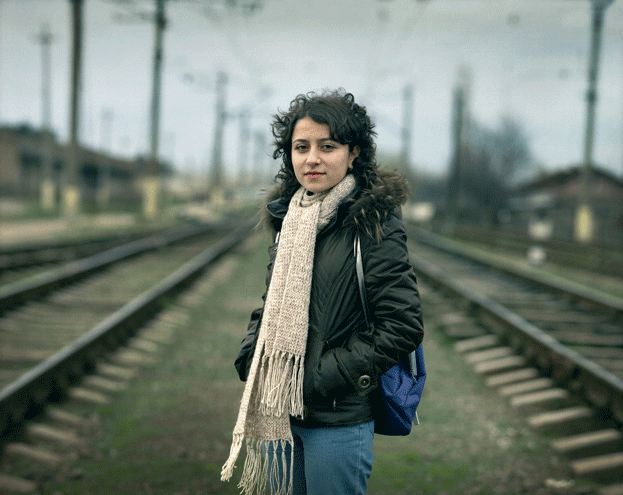 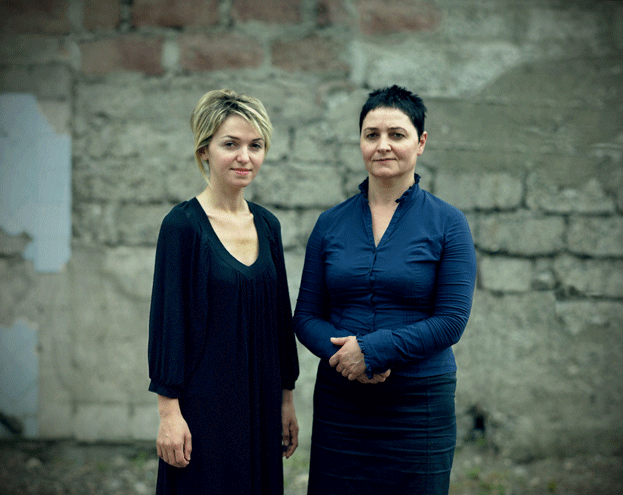 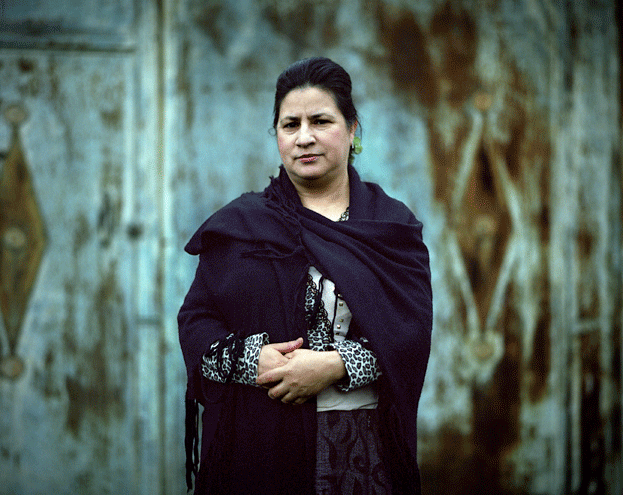 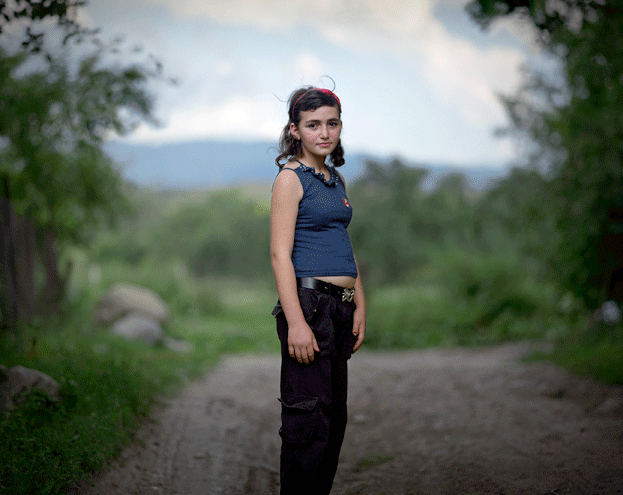 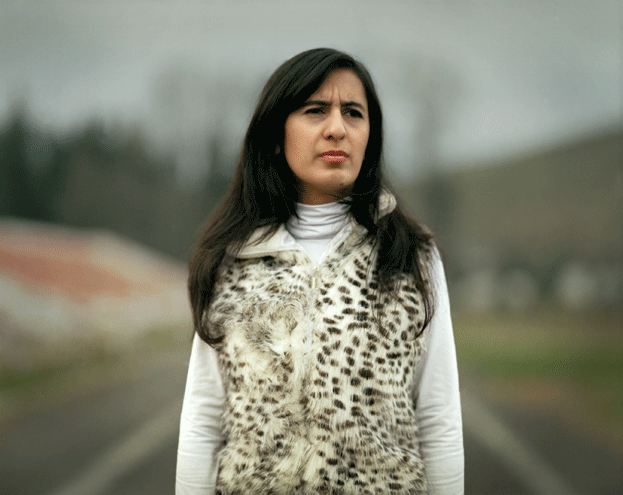 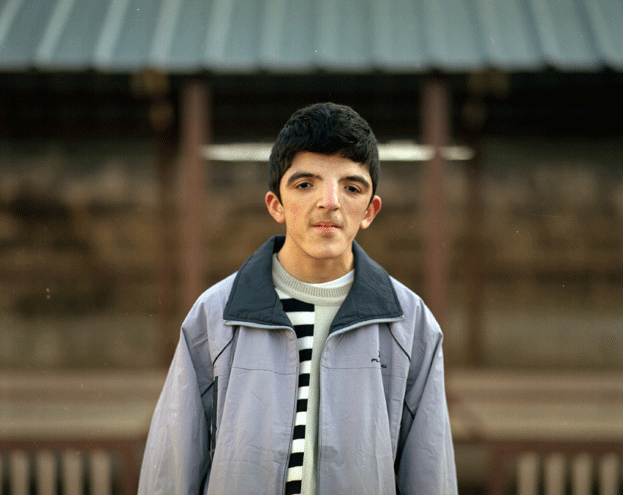 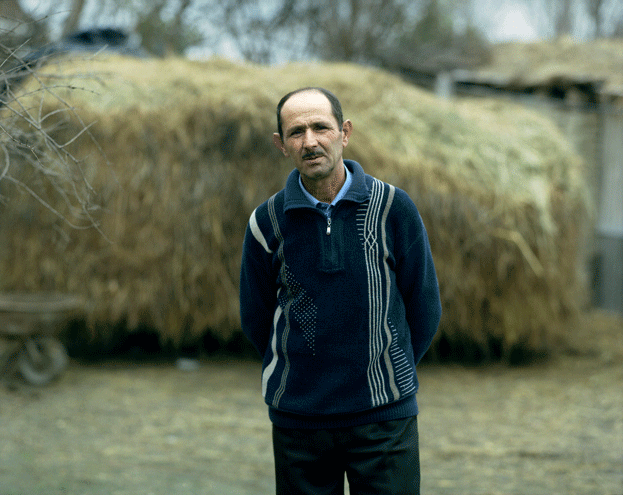 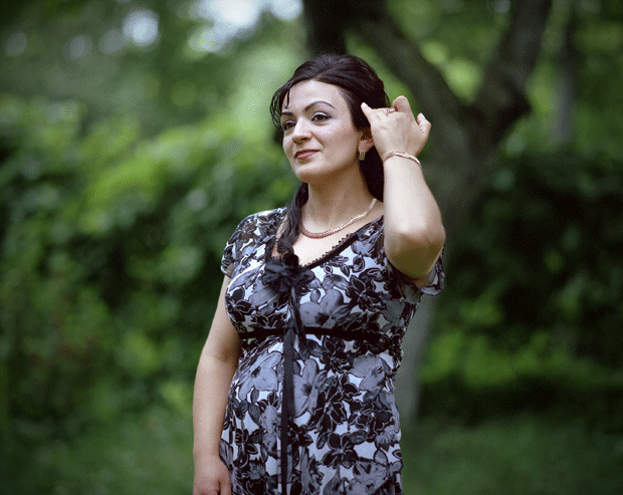 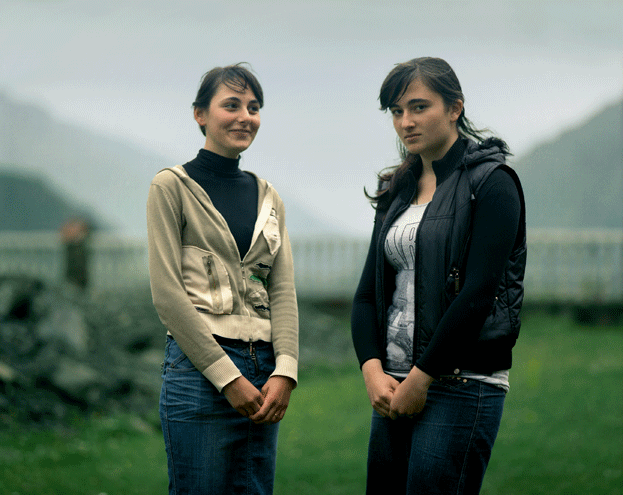 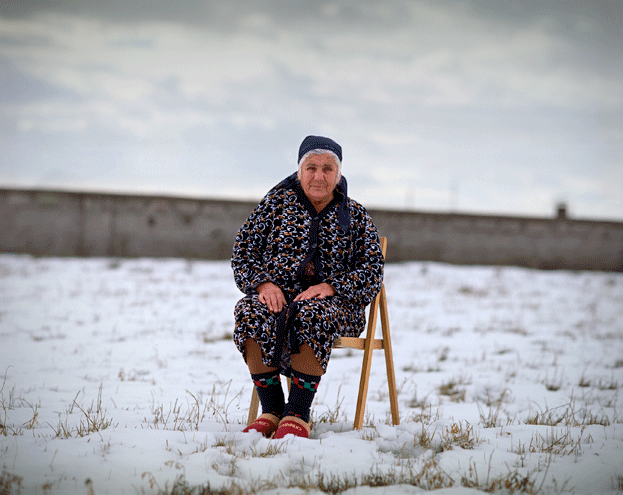 In 2009 I was awarded a US Fulbright Scholarship to produce a collection of large-scale portraits exploring the post-Soviet condition in the South Caucasus. It also gave me the opportunity to teach photography and cinematography to university students and industry professionals in the region. It was a life-changing experience, a rare professional gift that allowed me to focus on an aspect of photography that I consider central to my practice. It also gave me an opportunity to hone leadership skills, to build relationships with colleagues overseas, and to serve my country.

Georgia, Azerbaijan, and Armenia have shared in a common struggle to reinvent themselves in the wake of the Soviet Union’s collapse. At the heart of this rebirth lies the dimming legacy of their shared Soviet experience, viewed most often by Western audiences through familiar iconographies of decline: faded statues, rusted infrastructure, and war.

Such treatments of the region are at best inadequate. These photographs are an attempt to move beyond this sensational paradigm and explore the underlying issue of memory in a more intimate context. As a collection they eschew the romantic and the picturesque, focusing instead on average citizens from the anonymous ranks of the lower and middle classes. Their goal is to present the region not from a narrative perspective, but rather a meditative one, as they invite the viewer to study the quiet state so often masked by the flow of our daily lives. Portraiture, whose function has always been infused with a sense of time and loss, offers a specific kind of access to this state.

Together these photographs seek to create an environment—simple, silent, and unhurried—designed to offer viewers a reprieve: an opportunity to explore the the post-Soviet condition though a patient study of human form. 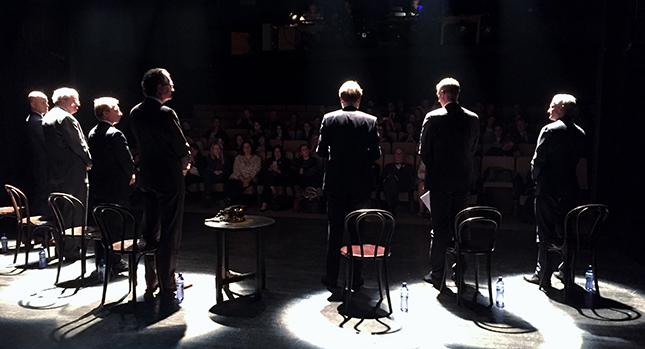 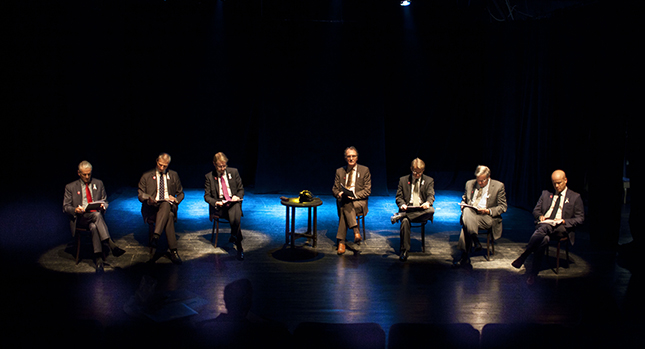 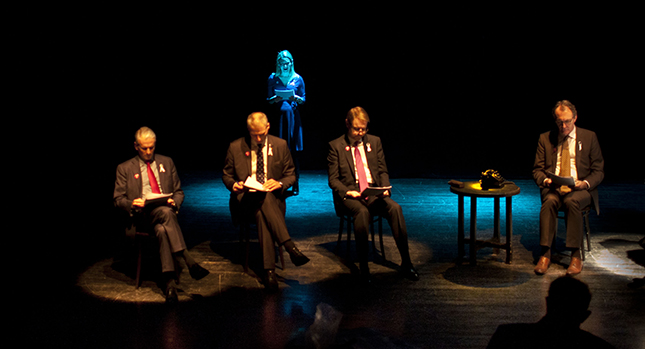 I was asked by the European Union Monitoring Mission in Georgia to direct a staging of "Seven" as part of fourteen days of awareness of gender-based violence. The play features the actual testimony of seven women whose lives were touched by violence. To read these testimonies we asked seven EU and US ambassadors to participate in the project. The play was performed at the Marjanishvili Theater in Tbilisi to a packed house.